“Finding Neverland” is appropriate for all ages

Playwright J.M. Barrie struggles to find inspiration until he meets four young brothers and their beautiful widowed mother. Spellbound by the boys’ enchanting make-believe adventures, he sets out to write a play that will astound London theatergoers. With a little bit of pixie dust and a lot of faith, Barrie takes this monumental leap, leaving his old world behind for Neverland, where nothing is impossible and the wonder of childhood lasts forever.

Peter Pan first appeared as part of a story within a story in Barrie’s 1902 novel “The Little White Bird.” Instead of living in Neverland, Peter had flown from his nursery to London’s Kensington Gardens, where he spent time with fairies and birds. In fact, he was described as being “betwixt-and-between” a boy and a bird. And while there were no pirate ships, Peter had another means of transport: a goat. It was in Barrie’s 1904 play, “Peter Pan” or “The Boy Who Wouldn’t Grow Up,” that Peter Pan lived with the Lost Boys, met the Darling family and had a friend named Tinker Bell.

In the original story, Peter and the Lost Boys could fly unaided. But after several reports of children injuring themselves attempting to fly from their beds, J.M. Barrie added fairy dust as a necessary factor for flying. 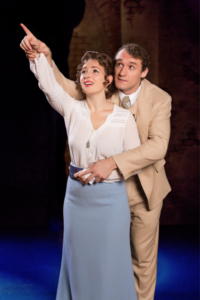