“Oh What a Night” with Jersey Boys!

Something big is headed our way…and no, it’s not another snow storm! Jersey Boys: The Story of Frankie Valli & The Four Seasons is your ticket to escape the winter cold, and it kicks off next Tuesday, January 21 for two weeks. We’re in the final week leading up to opening night, and as we celebrate the seven day countdown, we’ve teamed up with our trusted WOO venues and partners to bring some exciting promotions to satisfy your Jersey appetite.

We’re giving you over 35 chances to win a pair of tickets to opening night next Tuesday, January 21. Look for one of the enter-to-win promo boxes like the one shown below at any of the following locations before Friday, January 17.

You can also snack your way to tickets with these delicious red velvet, Jersey Boys-inspired cupcakes from CocoBeni Confections in Northborough. Purchase six of these sweet treats for your chance to win a pair of tickets to the show. 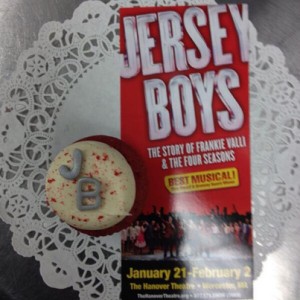 Look for these tasty delights at CocoBeni Confections at 247 W Main St in Northborough.

This entry was posted in Out & About, Promotions & Contests and tagged enter to win, giveaway, Jersey Boys, The Hanover Theatre, Tickets, WOO Card. Bookmark the permalink.