We recently sent our digital media assistant Harmony Wheeler to see “Bright Star” in the final weekend of its opening run in Los Angeles. Read on for her “bright” review of the show and find out five reasons why you won’t want to miss this unique Broadway musical when it comes to Worcester April 12-15, 2018. And don’t forget to subscribe to our 10th Anniversary Broadway Series! 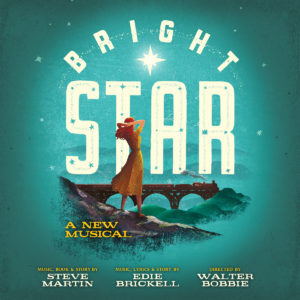 The creative team: I knew that award winners Steve Martin and Edie Brickell were selling points for this show, but I really had no idea what their collaboration would look like. The two had previously worked together on the music album that inspired “Bright Star,” and Martin is well known for both his comedy and his banjo. Those pieces came together beautifully on stage in a show filled with great bluegrass songs, hilarious quips and striking personality.

The journey: Very few shows are as well-written and fulfilling as “Bright Star.” Each moment serves a purpose. The show’s simple storytelling never feels forced. Nothing is drawn out or overdone. We connect with Alice Murphy’s hope as she searches for her lost child.  We learn the importance of home, love and redemption. And we know the satisfaction of a resolute finale. 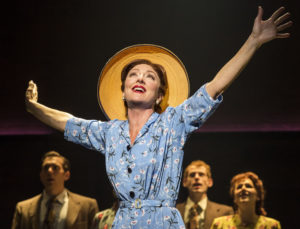 Carmen Cusack in the LA run of “Bright Star.” Photo by Craig Schwartz.

The staging: In its first act, “Bright Star” alternates between two time periods, that of an older Alice and that of her younger self. It is always clear where and when the story takes place. The distinction never confuses. Much of this is due to director Walter Bobbie’s euphoric staging, and the rest pays compliments to a carefully chosen actress able to convey both the joy of adolescence and the stained remorse of an experienced woman. Carmen Cusack of the original Broadway cast reprised the role for the LA run, and I am excited to see what a new lead will bring to Worcester.

Bear with me here as I spend a little more space on the staging of this production. You need to see this spectacular show, yourself, to really understand just how much Bobbie’s direction and Josh Rhodes’ choreography contribute. The ensemble occasionally provides extra percussion and often echoes the emotions present on stage through haunting vocals and captivating movements reminiscent of Lin-Manuel Miranda’s “Hamilton.” 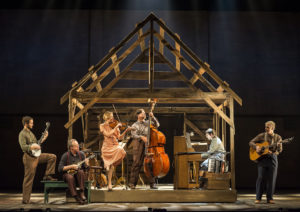 The LA cast of “Bright Star.” Photo by Craig Schwartz.

The scenic design: Eugene Lee’s stripped-down scenic design mirrors the simple, raw storytelling, with pleasant surprises too enjoyable to spoil here. You’ll just have to see it in Worcester to discover why I fell in love with the scenery.

The band: The majority of the musicians stay on stage in a small structure resembling the shape of a backwoods shack. A second act “Entr’acte” gives these talented players a chance to shine, while the fiddle finds particular significance throughout, highlighted by Japhy Weideman’s moody lighting. The music itself has a lovely country twang that most anyone will enjoy in concert with all else taking place on stage.

“Bright Star” is the complete musical theatre package. I walked out of the theatre barely able to keep myself from immediately texting my co-workers, three hours ahead and likely in a deep sleep. I’m glad I don’t have to contain my excitement with you!

This entry was posted in Broadway Series, Features, Upcoming Shows. Bookmark the permalink.